In 1970 Chevrolet introduced a brand new model to its ever-growing car lineup dubbed the 1970 Monte Carlo. Sharing its platform with the already existing and successful A-Body platform, the Monte Carlo layout was stretched ahead of the firewall to make it 210.2-inch and was originally known as the A-Body Special platform.

The Monte Carlo would eventually go on to its own unique G-Body platform but let’s not get ahead of ourselves now… The development of the Monte Carlo started as Chevrolet’s version of the Pontiac Grand Prix which had been outselling and cornering the personal luxury car market since its introduction in 1968.

Conceptualized by Elliot M. (Pete) Estes (general manager of Chevrolet) and Chevrolet’s chief stylist, David Holls, the Monte Carlo was modeled after the styling of the Cadillac Eldorado, although much of the body and structure was shared with Chevrolet’s platform sharing Chevelle. The firewall, windshield, decklid, and rear window were the same as the Chevelle, however, the exterior is where Monte Carlo takes a departure from its platform sharing predecessor.

The new exterior utilized “coke bottle styling” that featured concealed windshield wipers and an optional light monitoring system. Although the Monte Carlo was a bit late to the personal luxury car party (compared to the Buick Riviera and Pontiac Grand Prix), the Monte Carlo went on to become one of the most popular and best-selling models in GM history.

The styling of the 1970 Chevrolet Monte Carlo is distinguished by its chromed rectangular grille having a fine grid pattern of 720 small squares with two horizontal dividers and centered within it, a chrome and red crest emblem decorated by a Corinthian helmet, typically referred to as the “knight’s crest.”

Round headlamps with rounded chrome bezels and circular parking lamps inserted into the front bumper directly below the headlamps completed the luxurious frontend. The hood featured a very subtle yet fitting hood spear with no vertical hood ornament, much like its competition the Pontiac Grand Prix. The rear end featured tail lights with elegant chrome trim around the perimeter of the lens only, really hitting on those luxury feels.

On the interior, the Monte Carlo didn’t depart too far from its platform sharing Chevelle.

It featured an almost identical dashboard to the Chevelle with the added touch of luxury in the form of fake wood trim. Power windows, air conditioning, power seats, “rally” wheels, bucket seats, center console, and full instrumentation, are but a few optional pieces of equipment available, making the price of a fully equipped Monte Carlo more than $5,000.

Standard in the 1970-model-year Monte Carlo was Chevrolet’s 350 cubic in “Turbo-Fire” small-block V8 engine rated for 250 hp at 4500 RPM with a two-barrel carburetor.

Those who were looking to get both luxury and performance out of the 1970 Monte Carlo could have opted for the optional SS 454 package for a whopping $420. This package included a 454 CID Turbo-Jet 454 engine with a four-barrel carburetor, rated at 360 hp at 4800 rpm. It also included heavy-duty suspension, wider tires, “SS 454” badging, and an automatic load-leveling rear suspension. A Turbo Hydra-Matic three-speed automatic transmission was the only transmission available for this package. Although the Monte Carlo SS 454 was quite a fast car it would only make up less than 3% of Chevy Monte Carlos sold in 1970.

Shifting gear in the 70 Monte Carlo was a slew of transmission options.

Standard in the 1970 Monte Carlo is a column-mounted 3-speed Synchro-Mesh manual transmission that could be mated to either of the 350 ci power plants. In addition to the manual column shifter, buyers could have opted for a two-speed Powerglide automatic transmission (on 350 CID engines only), three-speed Turbo-Hydramatic, or a four-speed manual. Most Monte Carlos for the 1970-model-year utilized the Turbo-Hydramatic gearbox to shift those gears.

During the early months of the 1970 model year immediately following its introduction on September 18, 1969, the Flint, Michigan assembly plant (where most Monte Carlos were built) underwent a strike that limited the overall model-year sales.

Chevrolet projected sales before the debut of the 1970 Monte Carlo to be around 185,000 but due to the strike, around 145,000 Monte Carlos were sold for the model year. During those early months, Monte Carlos were in short supply, with full-scale production not happening until February 1970, leaving many would-be buyers very disappointed (this is even touched on in a televised Chevrolet Ad from 1970 seen below).

Despite this disruption in the supply chain, Monte Carlos sold well and often at full list price, making it a profitable model for Chevrolet. However, the optional SS 454 Monte Carlos did not sell so well in 1970, with only 3,823 units. This had mostly to do with the comparable 1970 Chevelle LS5 & LS6 that plain and simply outperformed the SS 454 Monte Carlos, which were also not marketed traditionally as one of GM’s muscle cars. 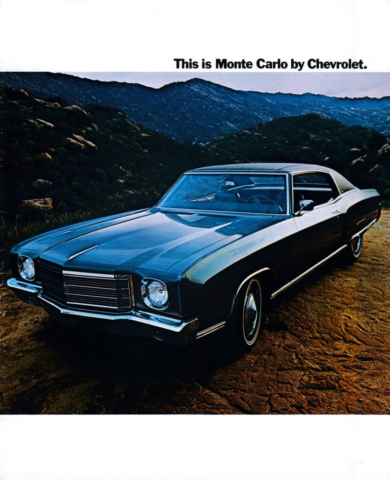 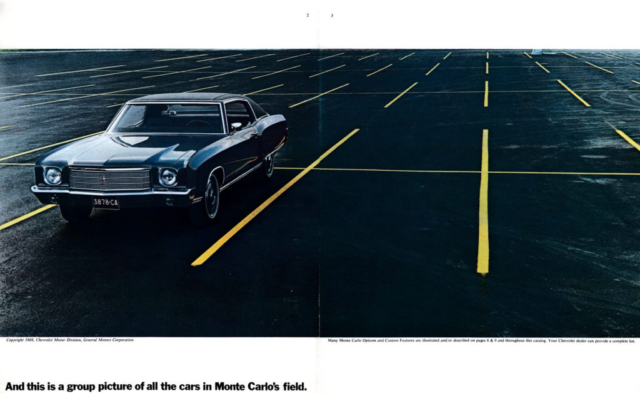 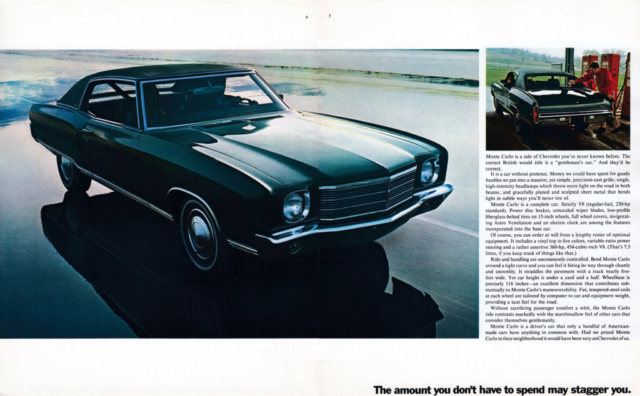 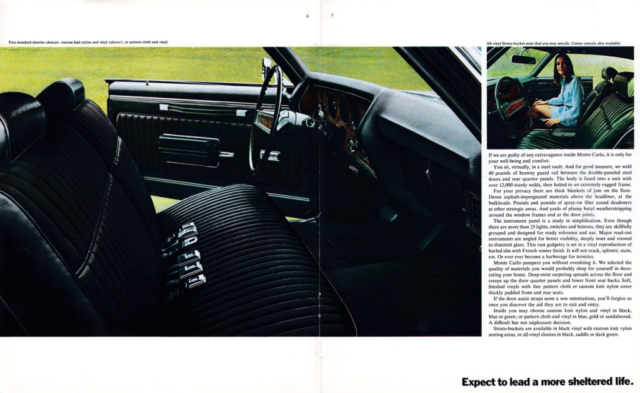 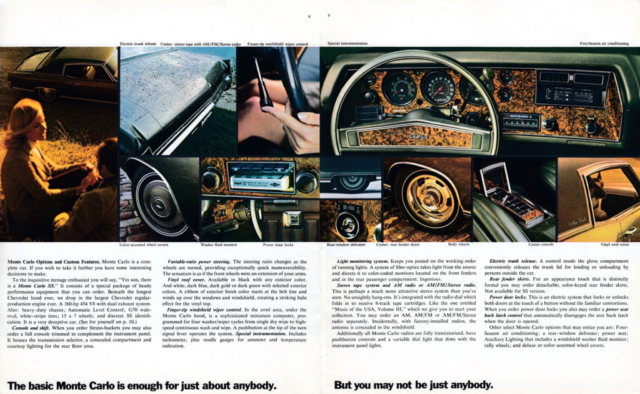 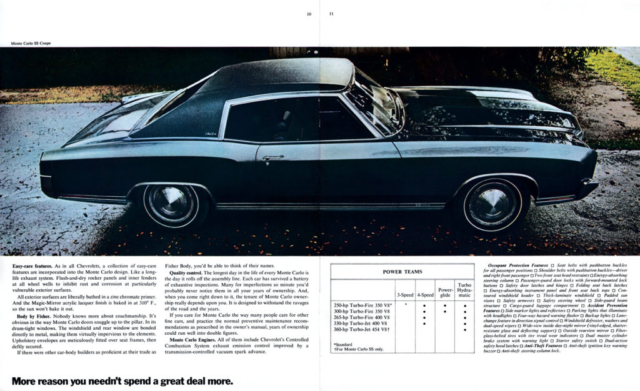 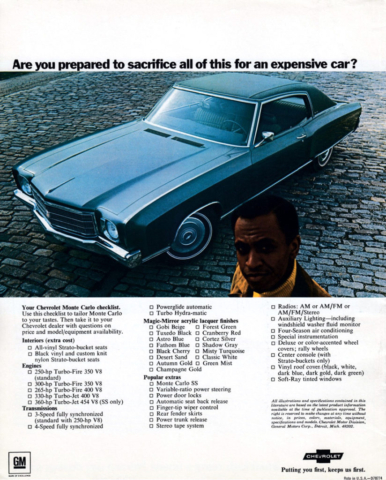 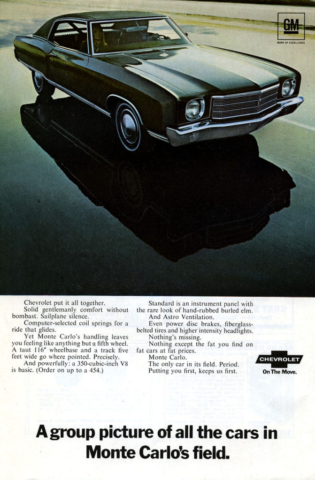 *The two Chevrolet 400 CID V8s offered this year was actually two different designs. The two-barrel carbureted Turbo-Fire 400 was a Small Block Chevrolet V8 engine, similar but different internally to the 350, while the Turbo-Jet 400 was a slightly enlarged version of the 396 CID big-block V8 and had an actual displacement of 402 CID.* 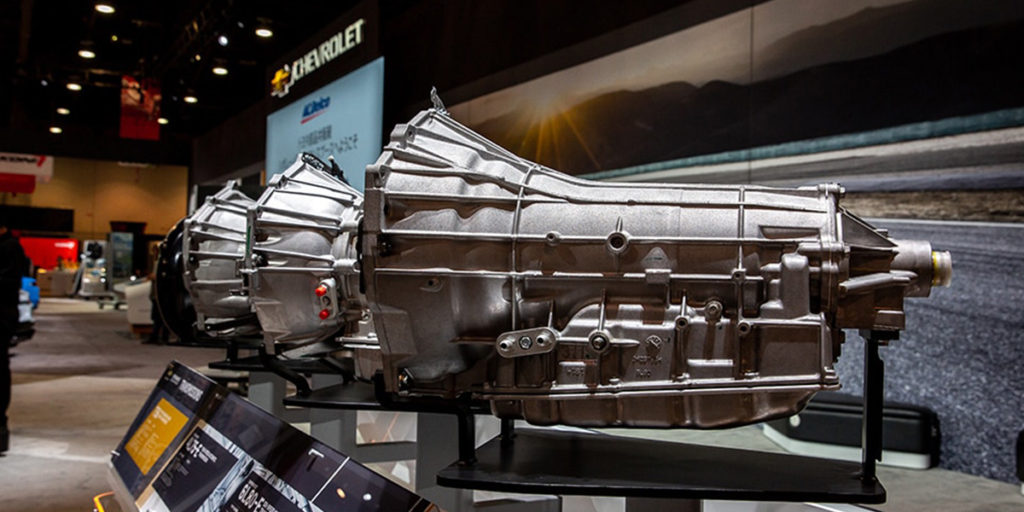 The Supermatic 6L80E Transmission In 2006 General Motors released their newest automatic transmission, the six-speed automatic that represented the latest and greatest. It was only 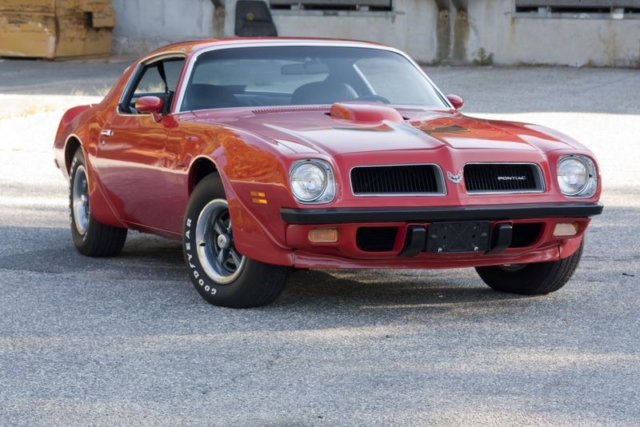 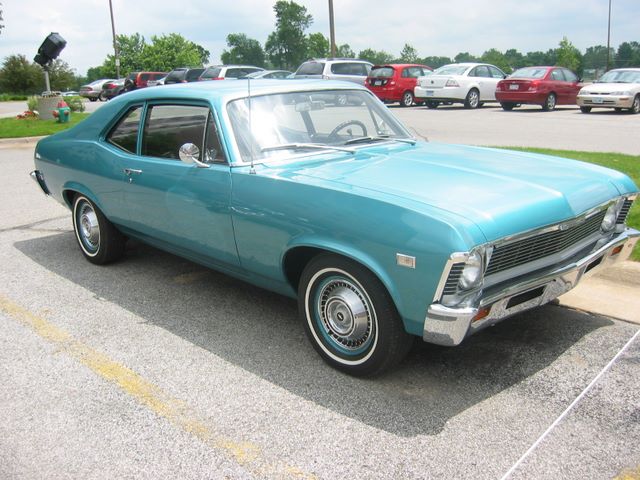 300 Cars Fill Ground Up Classic Car Show More than 300 beautifully restored, high-performance and customized cars made their way to the Ground Up facility