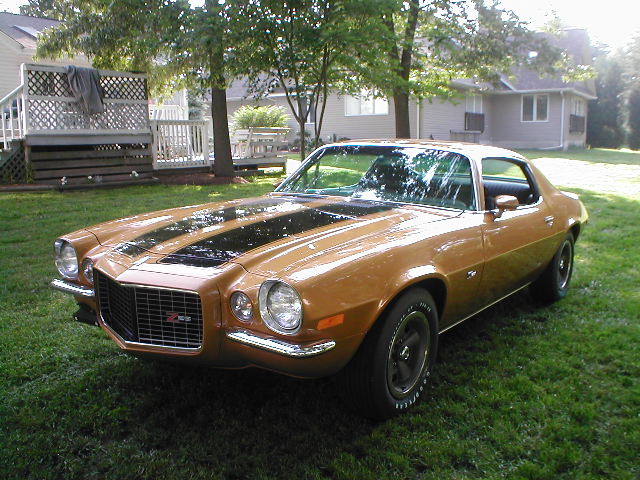 Most of the 1969 innards Camaro was transferred over to the all new, 1970 Camaro. The new body now consisted of a fastback roof line, no-vent full door glass and this year saw the removal of the rear side quarter windows.

The standard Camaro model offered a different bumper configuration when compared to the 1970 RS model.

The 1970 Chevy Camaro is considered one of the most valuable and sought after years. In particular, the rare 454 V8 is highly sought by many collectors and car enthusiasts alike.

1970 saw the introduction of the all new Second Generation Camaro . The 1st generation Camaro (1967 – 1969) was seen as a hasty response to the Ford Mustang. It was considered a compromise by some critics. There would be no compromises with this car. Due to production delays the 1970 Camaro was introduced in February 1970, half way into the production year. Because of this, some people will call the 1970 Camaro a 1970 1/2, but officially the car is a 1970 model year Camaro. Good things come to those who wait, and this car was met with rave reviews from nearly everyone. Chevrolet had a winner that would run for 12 years.
It was 2 inches longer, 1.1 inches lower, and 0.4 inches wider than the previous Camaro but still had a 108 inch wheelbase. It’s doors were longer by 8 inches and the roof was moved back giving the car a sleek long hood and a short rear deck which typified the pony-car. The convertible body style was no longer available and the windshield was swept back increasing visibility by 10% along with hiding the radio antenna within it (depending on radio choice). The rear view mirror was bonded to the windshield and no longer hung off the roof trim. Efforts were made to eliminate road noise by strategically insulating various points on the car. The interior of the car was completely redesigned with a new dashboard, console and other interior trim.

The Camaro was also available with a distinctive appearance package called the Rally Sport (RPO Z22) option. Unlike the previous years hidden headlights , the RS package included a distinctive nose and bumper treatment, round front parking lights, hidden wipers and other trim. The Rally Sport package could be added to any model Camaro and when combined with the SS option became a RS/SS or when combined with the Z28 it became a RS/Z28.
Further details on the Rally Sport can be found here.

The “Super Sport” (RPO Z27) package was continued. This model offered stylish performance , and was the only way to obtain the 396 Big Block Chevy engine (actually displaced 402 cubic inches).
Complete information on the Super Sport can be found here.

The “Z28 Special Performance Package” (RPO Z28) was not only positioned as the top Camaro performer, but it put its money where its mouth was. Designed to race in the SCCA Trans Am Series, the 1970 rules changes allowing for the 5.7L engine meant the Camaro was able to now use the 350 engine. The previous Z28’s were limited to 302 cubic inches and were known to be temperamental on the street. The bigger engine also allowed an automatic transmission to be used in the Z28 for the 1st time. Due to the solid lifter, high revving cam, Air Conditioning was still not available on the Z28. With a stout drivetrain, including a mandatory 12 bolt rear axle, and a tuned suspension, the Z28 was a match for anything found on the street, or at the track.
Complete information on the 1970 Z28 can be found here. 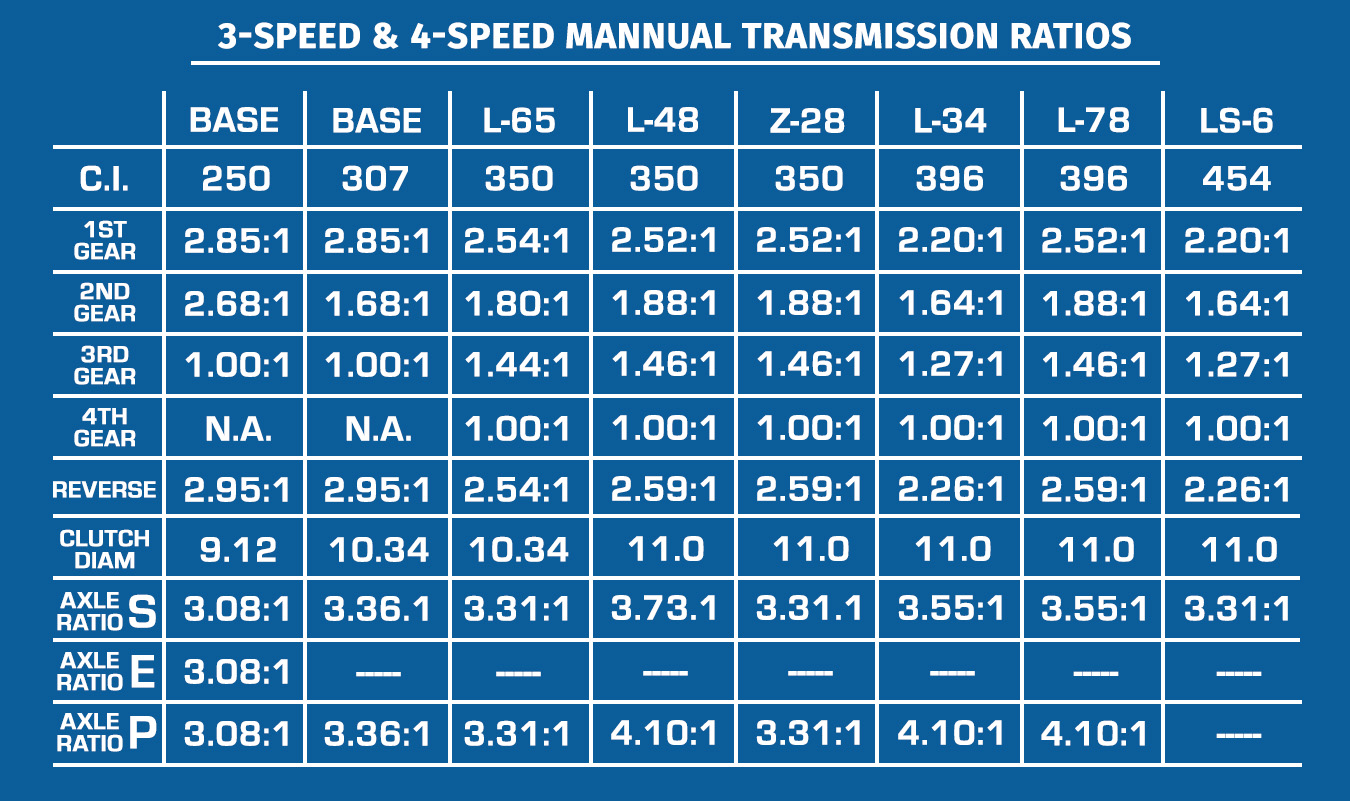 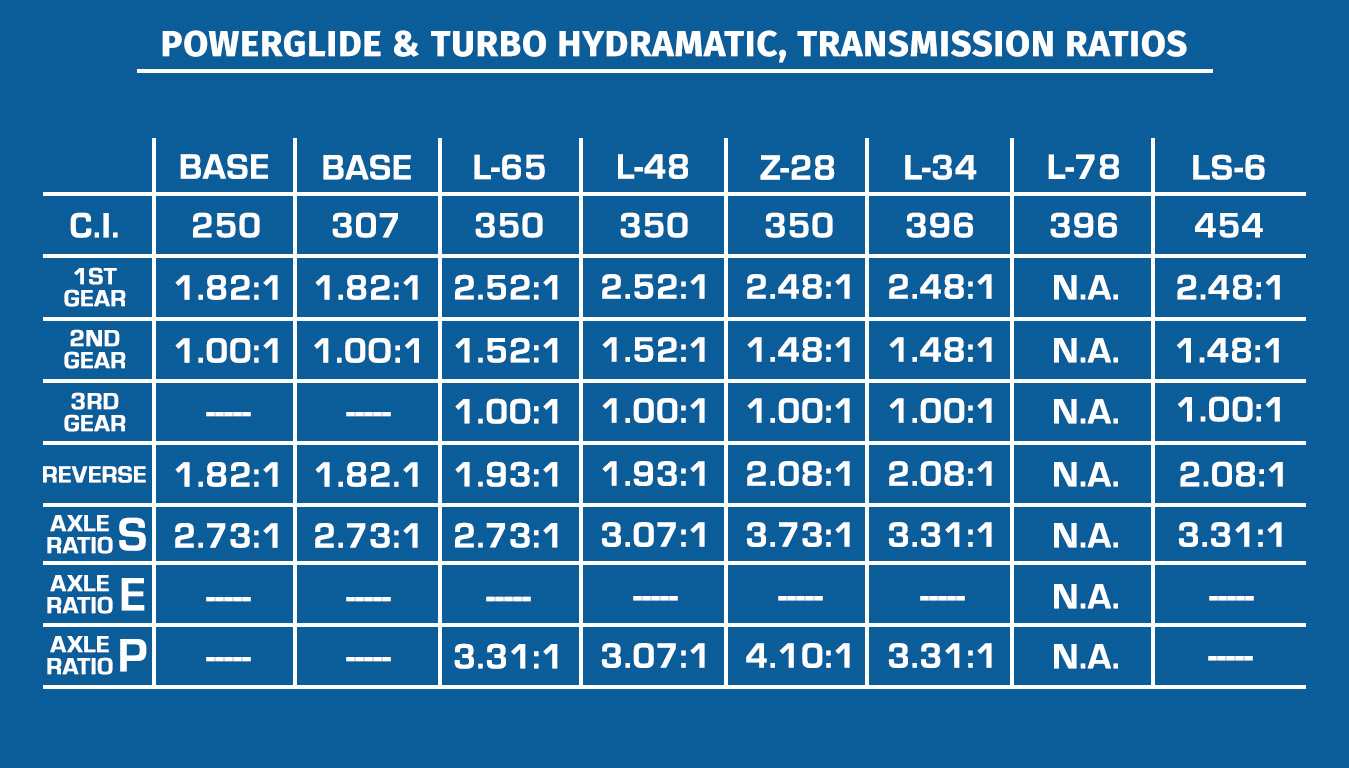 had at no charge if it was included as standard equipment on the Z28, Rally Sport or Super Sport or as part of an option package.

1970 Camaro Exterior & Interior Color Codes:
T* Option prices are retail for base model Prices could be reduced or option could be rim Tag 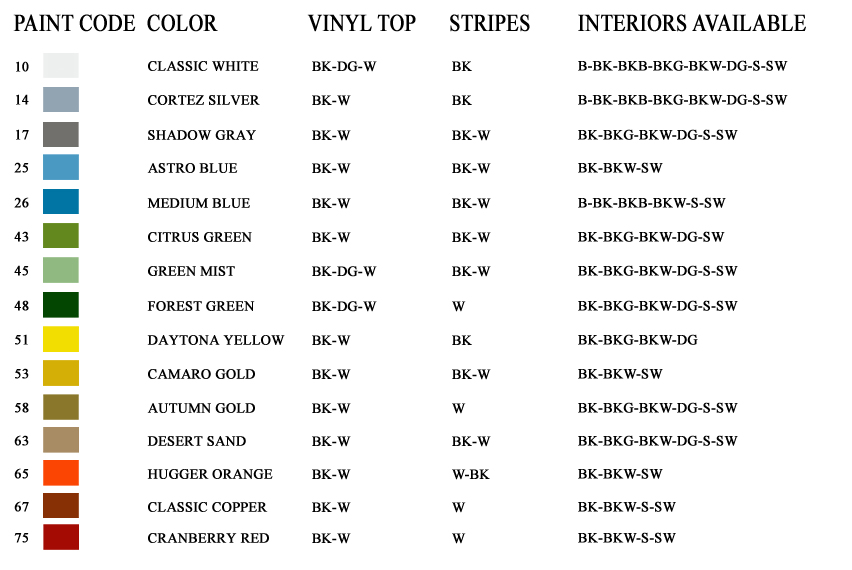 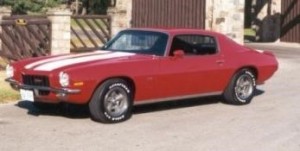 Mandatory choice of same Muncie 4-speeds as before, with special 2400-rpm-stall torque converter Turbo Hydra-Matic optional. First year an automatic transmission could be ordered in the Z-28.