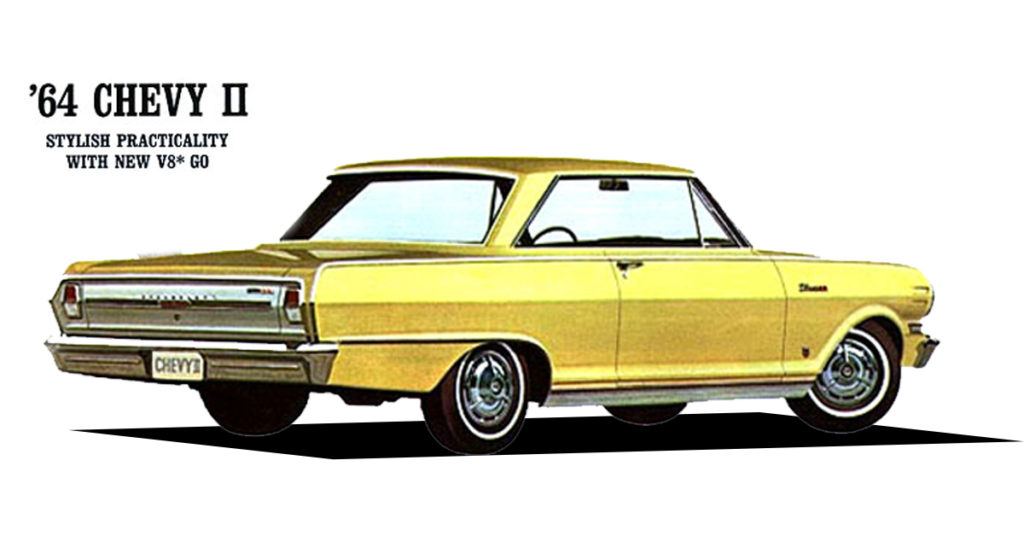 It was still considered a quiet, sturdy, sensible, and unpretentious car for the masses. Chevrolet did decide to drop both the convertible options and the Super Sport option in 1964. It wouldn’t be untill mid-model year that Chevrolet would offer a Sports Coupe to satisfy the demand of the consumer. Being this late to the party did result in a drop off in sales as well as showroom appeal for the 1964 Nova. The 1964 Nova Sports Coupes featured thin body-peak moldings and silver trim befind the rear wheel arch that extended to the rear end.

The interior of the 1964 Chevy 2 / Nova was marketed as being both practical and luxurious at an affordable price.

Depending on the model, a 1964 Chevy 2 / Nova could be equipped with all cloth, all vinyl, or a combination of the two materials, in a range of 6 total color options: red, fawn, aqua, blue, saddle, and black. Deluxe style window cranks and door handles helped to accent the luxury styling of the door panels, while foam padded armrests with ash trays included on the rear rests ensured occupant comfort. Lush deep twist 80/20 loop carpeting was also available as was the case on many of Chevrolet’s models.

An all-transistor radio was available as optional equipment with either manual or pushbutton tuning. Air conditioning was available with outside air ventilators as standard. Bright chrome trim accented many of the interior features such as the rearview mirror, armrests, steering wheel horn ring, among other items. Instrumentation was provided in the form of a speedometer, odometer, and fuel gauge along with indicator lights for oil pressure, engine temperature, and generator as standard equipment nestled in a padded instrument panel. Nova Super Sport would have these replaced with full instrumentation plus clock.

The standard engine became the 194 cubic inch Hi-Thrift engine which produced 120 horsepower. Many new options were made available from the factory, with the major option being the new optional 4-speed manual which was added to the dealer options list in 1964. The new V8 engine was 283 cubic inches and produced 195 horsepower. Chevrolet rated the max output for the V8 at 220 horsepower. The V8 engine was available as part of the Chevy II Nova Super Sport package for the first time in the Chevy II/ Nova history.

Being in its third year of production, the 1964 Chevy 2 Nova continued to refine the formula that Chevrolet had adopted for their compact offering.

The 1964 Chevy 2 / Nova was a delicate balance between practicality and luxury that appealed to a range of consumers looking to get the best value for their money. While certain options had been dropped from previous years, other innovations were introduced in an attempt to keep buyer interest fresh in this competitive market segment. Despite their best efforts, the first generation Nova was beginning to show it’s age, which was reflected in declining sales figures that would continue until the 1970 model year. 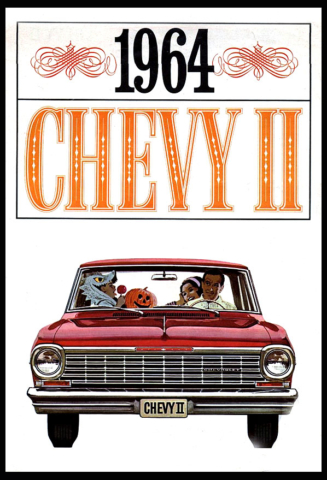 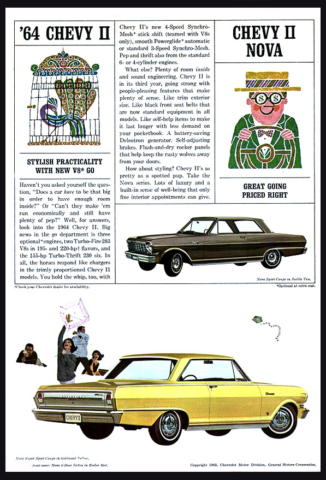 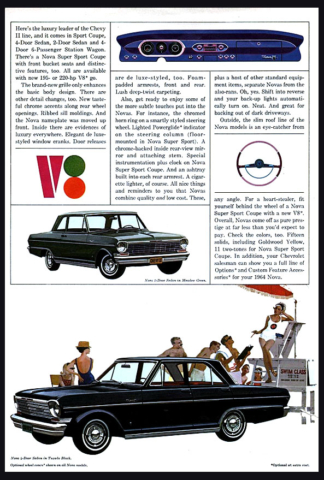 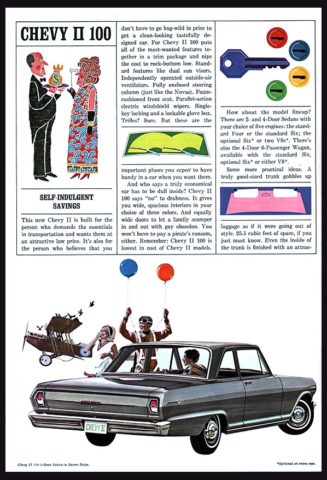 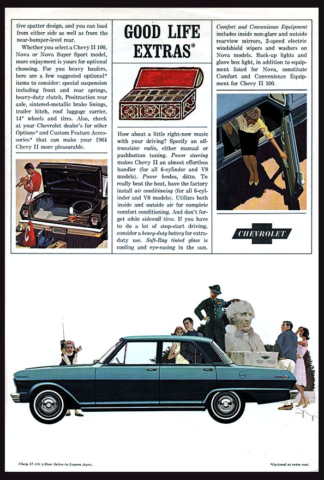 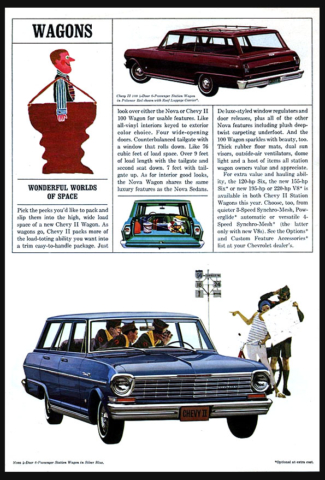 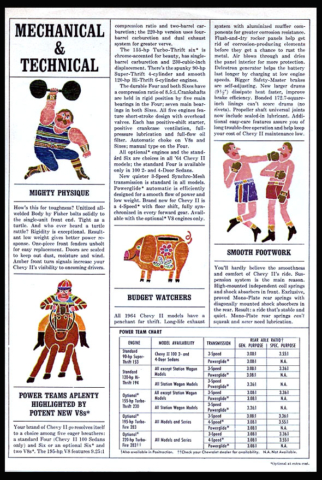 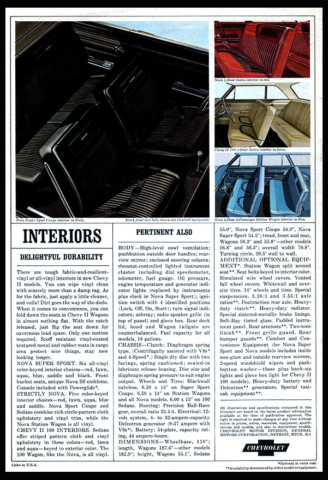 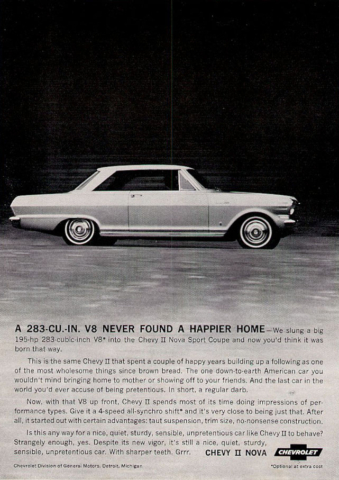 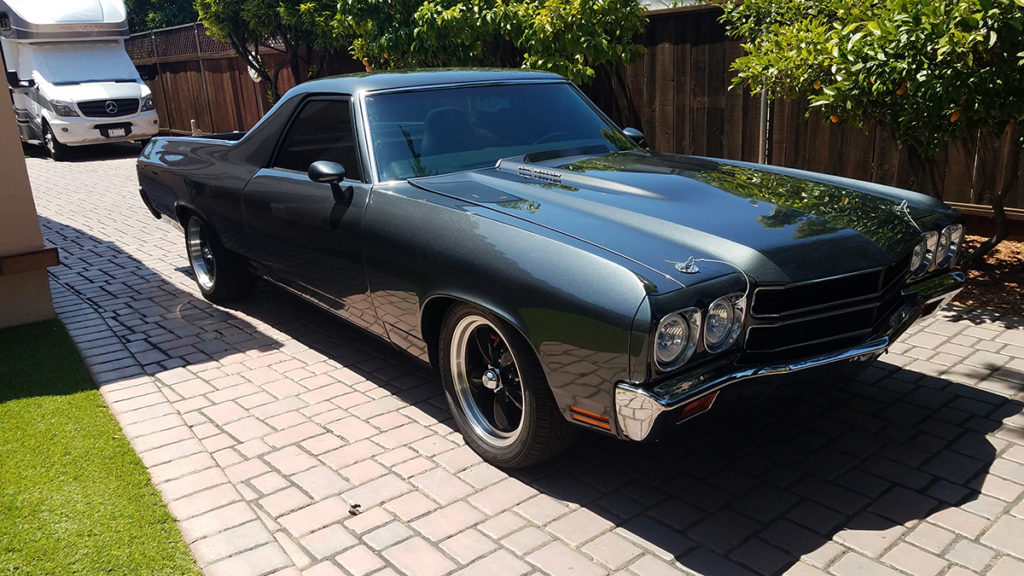 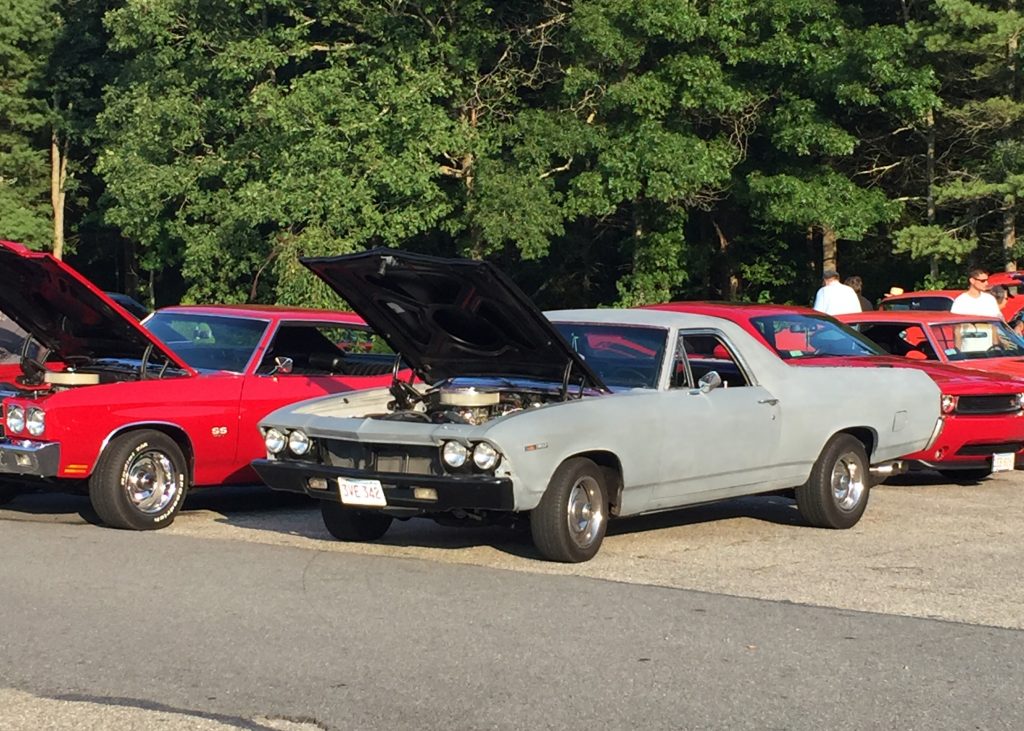 Since he was a young child Jessie had always been interested in Chevrolet El Caminos. When Jessie was 15 he bought three El Caminos for 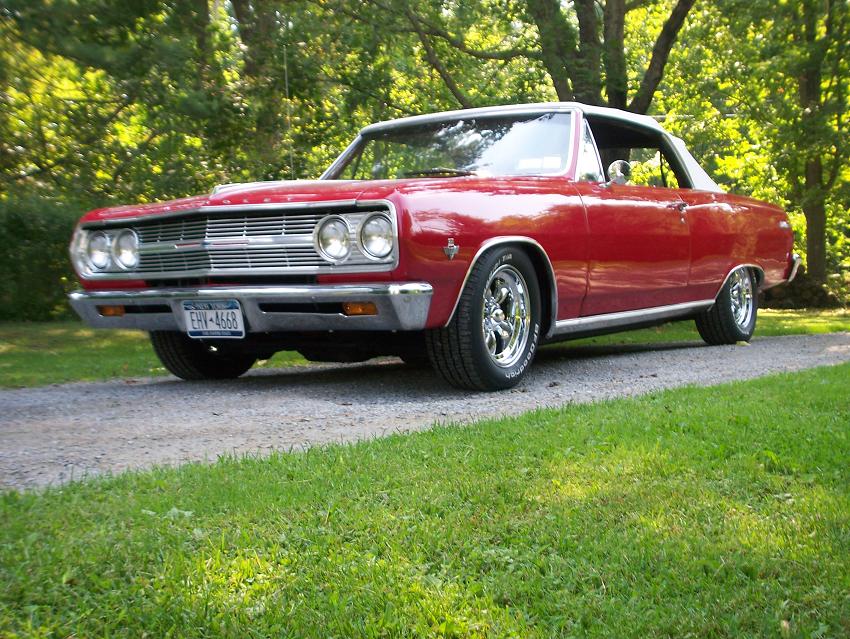 John bought this 1965 Chevelle in April of 1990 and has replaced just about every piece of the car over a span of 19 years,